One of the major developments in the world economy over the past 15 years has been the extraordinary fall in average real interest rates. (after allowing for inflation.) As the graph below shows, the world average fell from 4 per cent in the 1990s, to 2 per cent in the period just before the financial crisis of 2007. There was then a further steep fall to the near zero real rates of the present time – the lowest in recorded history.  Interest rates have generally been lower in the high-income than in the emerging economies, but in both regions real rates have plummeted. 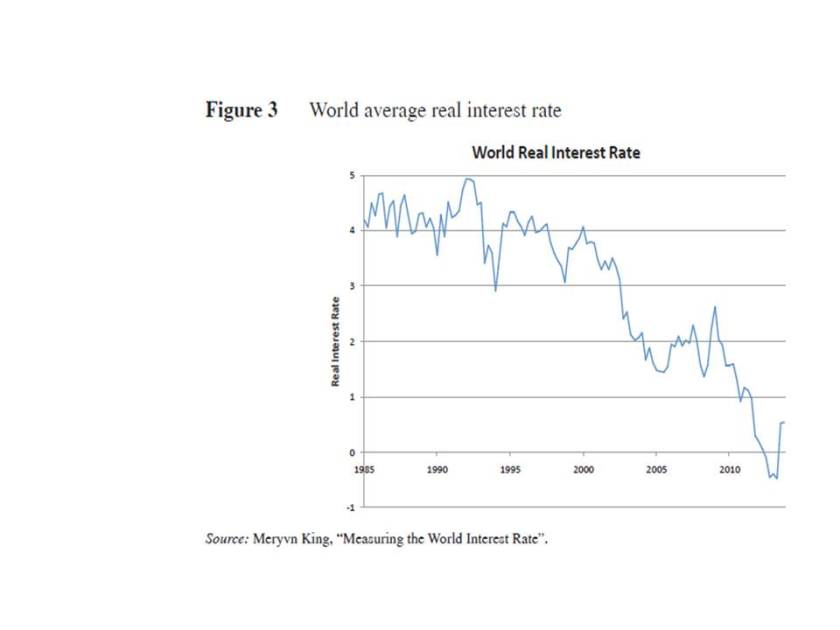 Part of the explanation is that in most of the major economies, governments have been encouraging their central banks to implement low interest rate policies. For example programs of quantitative easing [QE] have involved the large-scale purchase by central banks of bonds in the financial markets. This is often called printing money, but the term is misleading. It is not that governments have been financing their expenditure by getting the central banks to print money. More accurately, what is increased by QE is not the money supply, but the level of reserves in the banks. As Mian and Sufi explain in their outstanding book House of Debt, p. 154,

QE and similar policies are part of the falling interest rate story. But other forces have been at work in lowering rates. These are set in the financial markets by the balance between the demand for money to borrow and the supply of money available to lend. The major central banks intervene powerfully in these markets. Despite the huge deregulation of finance – one of the central objectives of the post-1980 neoliberal agenda – until the early 2000s, the central banks in the big countries seemed still to have the power to determine short-term interest rates in their domestic economies, and also to exercise considerable influence on long-term rates.

But the fundamental reason for the fall in long-term real interest rates since 2000 is a global surplus of money capital. There has been a larger supply of money capital available to be lent out, than the demand for credit by borrowers. During the recent period in which central banks have been trying to lower the interest rate, they have been only adding a further impetus to processes that were happening anyway.

The strongest evidence in support of the surplus money capital thesis is that when, in 2004, the US central bank, the Fed, tried to raise long-term interest rates, it found itself unable to do so.

Alan Greenspan was Fed Chairman from 1987 to 2006. In his memoirs The Age of Turbulence (2007) he recounts his traumatic encounter with the limitations of central bank power in the epoch of deregulated neoliberal finance. After a three year policy of low interest rates to lift the economy from the downturn caused by the dot.com crisis of 2000, starting in Feb 2004, the Fed implemented a series of increases in short-term interest rates.

Normally the financial markets would respond in ways which caused long-term interest rates to rise as well. The Fed had decided that a increase in long-term rates, and notably the mortgage rate, was urgently required to cool out fast-rising prices in many sectors of the US housing market. (They sensed trouble ahead … though nothing remotely on the scale of the 2007 crash.) But in June 2004 Greenspan and his colleagues were shaken by the refusal of long-term rates to rise:

We had increased the [short-term] Federal funds rate, and not only had yields on ten-year Treasury bonds failed to rise, they’d actually declined … this was extremely unusual … market pressures seemingly coming out of nowhere drove long-term rates down instead of up … What were these market forces? They were surely global, because the declines in long-term interest rates during that period were at least as pronounced in major foreign financial markets as they were in the United States  (p.378).

Greenspan recognized that there were now forces at play in the world economy which were acting to lower interest rates. However, he was still taken aback by the inability of the world’s most powerful central bank to effect even the smallest rise  in long-term interest rates in the US economy. He continues:

Even though globalisation had reduced long-term interest rates, we had no reason to expect, in the summer of 2004, that Fed tightening would not carry long-term rates up with it… The unprecedented response to the Fed money tightening suggested that in addition to globalisation profoundly important forces had developed whose full significance was only now emerging. I was stumped. I called this historically unprecedented state of affairs a conundrum.

Looking back to this moment of revelation, Greenspan, in his memoirs, meditates on the deeper forces which have been influencing the global supply and demand for credit. He touches on a number of themes which need to be addressed in any Marxist account of the crisis. Because inflation had fallen worldwide since the early 1990s, lenders were willing to accept a lower rate of interest. This fall in price inflation owed much to the fact that more than a billion low-wage workers had joined the world industrial labour force after the integration of China, Russia and other centrally planned economies into the international production and trading system.

So – that’s one factor, says Greenspan. But connected with this, he says, is:

a worldwide increase in the supply of loanable capital, relative to the investment of those savings in productive activity. Excess potential savings flooded global financial markets, driving interest rates lower… during the past five years developing country growth has been twice that of developed countries. Their savings rates, led by China, rose from 24 per cent in 2002 to 32per cent in 2006 as consumption lagged and investment fell far short of the rise in savings (pp. 285-7).

The Fed found that it had no alternative but to go with the flow of market processes – to accept that monetary policy was now more limited in its capacity to control interest rates. Thus we find Greenspan writing that:

this decade’s decline in long-term interest rates, both nominal and real, is mainly a result of geopolitical forces, rather than the normal play of market forces … I very much doubt that either policy actions or central bank anti-inflationary credibility played a leading role in the fall of long-term interest rates in the past one to two decades… I doubt that we had the resources to counter the downward pressures on real long term interest rates which were becoming increasingly global. Certainly Japan did not. (pp.387-391).

In 2016 the major central banks are struggling to counter the global forces that are lowering interest rates, and also causing growth to falter. And they find themselves compelled to try and achieve this …by pushing interest rates even lower! Yet the prevalence of zero (and negative) interest rates in many sectors of world credit markets poses serious dangers for the system. Profitability in the banking sector is badly hit. Cheap borrowing provides the fuel for speculative booms in financial markets. General levels of debt tend to increase because the cost of servicing debt is low. Debt overstretch makes the weaker sectors in the world economy vulnerable to small increases in interest rates, or to whatever undermines their capacity to service debt – hazards such as a fall in the rate of growth, an increase in unemployment, or a decline in profitability.